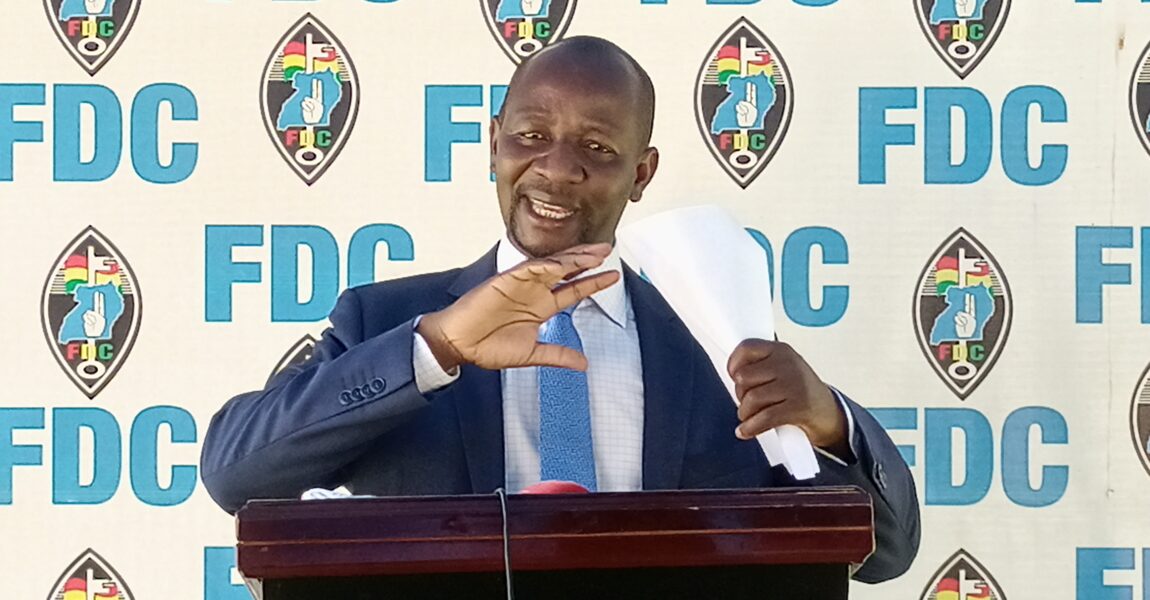 The FDC condemns the continued violation of its founding President Col. Dr. Kizza Besigye’s right. Dr.Besigye like any other Ugandan has a right to freely move within and outside the country. It is therefore illegal and un Constitutional for police to continue surrounding, barricading his house and restricting his movements. Moreover there is Court ruling stopping the state from turning Dr. Kizza Besigye’s residence into a prison.

The FDC therefore demands for the immediate withdrawal of police and military from Dr Kizza Besigye’s residence and to stop interfering with his movements.

The Forum for Democratic Change (FDC) would like to invite citizens to critically examine the budget. The Budget does not offer immediate solutions to the rising cost of living in the country. Taxes on essential goods such as fuel and raw materials were maintained. It announced no subsidy on critical items such soap, paraffin, cooking oil and fuel.

This means, fuel prices will continue going up until the Almighty Allah brings them down.

Of importance to note, is the reckless borrowing by Mr. Museveni to finance his government’s luxurious spending. Of the Shs 48 trillion budget, Shs 16.3 trillion has been reserved for debt repayment. The Shs 16.3 debt repayment amount includes over Shs 5 trillion which is interest on money borrowed.

Please note that next financial year, we will pay interest on money borrowed from local banks to about Shs 5 trillion. Interest on treasury bonds per year is now Shs 4.1 trillion and on treasury bills is Shs 583 billion.

We are also required to pay Shs 137 billion commitment fees on money borrowed but delayed to use.

Mr. Museveni owes the country an explanation. Because as all this is taking place, our total debt as a country has reached Shs 73.5 trillion. Of this Shs 45.7 trillion is external debt and Shs 27.8 trillion is domestic debt.

And this this debt of Shs 73.5 trillion doesn’t include arrears which today stands at Shs 4.1 trillion. Arrears means money owed to people who have supplied government.

It also doesn’t include guarantees to private people who have borrowed. Please understand that there are private companies that have been guaranteed. Museveni has committed the country to pay incase these private companies default. This is what they call contingency liability which today stand at Shs 160 trillion.

We are a country in crisis.

The country needs to remember that Mr. Museveni and some senior UPDF officers were taken to the International Court of Justice for stealing DR. Congo’s resources around 1997/98. Congo won the court case and we are required to pay for the minerals that we stole from Congo.

The Court ruled that we pay to Congo $325 million which is Shs 1.1 trillion. Mr. Museveni has put in the budget Shs 236 billion towards this obligation.

The FDC demands that Museveni who sent the soldiers on his imperial adventure and the individual officers who participated in the looting of Congo must be made to pay this money. Museveni’s brother Gen. Caleb Akandwanaho was a key suspect in this looting. Museveni should sale his Kisozi and Rwakitura farms to pay this debt.

The FDC President and a team of senior leaders are in Omoro canvassing support for the FDC candidate Mr. Justine Odongo Obiya after completing a mobilization tour of northern Uganda on Friday last week.

Together with the candidate the FDC President and his team addressed supporters in Odeke sub-county yesterday and will be in Lalogi and Lakway sub-counties today. Senior FDC leaders who are with the President Eng. Hon. Patrick Amuriat include; Hon. Amere Onekalit (Kitgum Municipality), Hon. P.P Okin (Chua) and Hon. Simon Oyet (former MP Nwoya).

Before going to Omoro, the FDC President held mobilization meetings in Yumbe, Arua, Pakwach, Lira, Apac, Kitgum and Gulu City. These meetings were attended by FDC leaders and candidates in the last elections.

Last evening Museveni attempted to explain away an economic crisis that he has failed to handle. He preached frugality because subsidies and tax exemptions would interfere with the country’s development agenda.

This is preaching water and for you, you drink wine. Mr. Museveni continues to live a life of ostentation as if the country is not in distress. He employs 1500 employs at his residence (State House) including 139 presidential advisors. He has even included Shs 8.3 billion in the budget to pay rent for these advisors. And you who these advisors are; Butcherman, Full Figure, Kusasira.

State House which is not a garden, receives agriculture supplies and services. Mr. Museveni first preach frugality to yourself sir.